The earliest traces of Compagnonnage date back to the Middle Ages.

It is only through documents still extant that we know of the existence of groups of young journeymen who travelled, helped one another, practised rituals in various circumstances, and possessed common attributes and vocabulary. Most of the earliest records of these compagnons (“companions”) are to be found in judicial archives.

13th century: a stained-glass window in Chartres Cathedral and another at Bourges depict stonecutters at work. The decorative headband of leaves or flowers some of them are wearing may well be one of the earliest representations of the “flowery colours” (ribbons) sported by the Compagnons Passants Tailleurs de Pierre (“Itinerant Stonecutters’ Guild).

1420: an edict issued by Charles VI bears upon journeymen shoemakers “of several languages and nations (who) came and went from town to town, working to learn of, know of, see and recognise one another.” These words have often been regarded as a reference to the practice of the “tour of France”.

1464 to 1476: The Dijon police authorities uncover the practices of the cutlers’, couturiers’ and saddlers’ compagnons. Organised into societies, they imposed entry taxes, known as “lave-pied” (foot-washers) on their fellows coming in from other towns, kept their businesses in pledge, and sanctioned any who baulked.

1480: An illumination by Guglielmo Caorcino depicts the siege of Rhodes by the Turks. In order to prevent the enemy from breaching the fortifications, workers are busy strengthening the walls. Behind the ramparts, the Grand Master of the Order of the Knights of Jerusalem and his knights are receiving a group of construction carpenters and stonecutters tools in hand. The Grand Master has his baton on the shoulder of one of the carpenters, another is kneeling, and other workmen are approaching the knights. A carpenter and a stonecutter are both wearing a ribbon round their heads. Are these the same “colours” that were worn around their hats by carpenters’ and stonecutters’ guild members up until the early 20th century?

Other documents have come down to us which, although not formally attesting to the existence of guilds, at least show that groups of workmen from a variety of trades were beginning to organise themselves independently of city corporations. 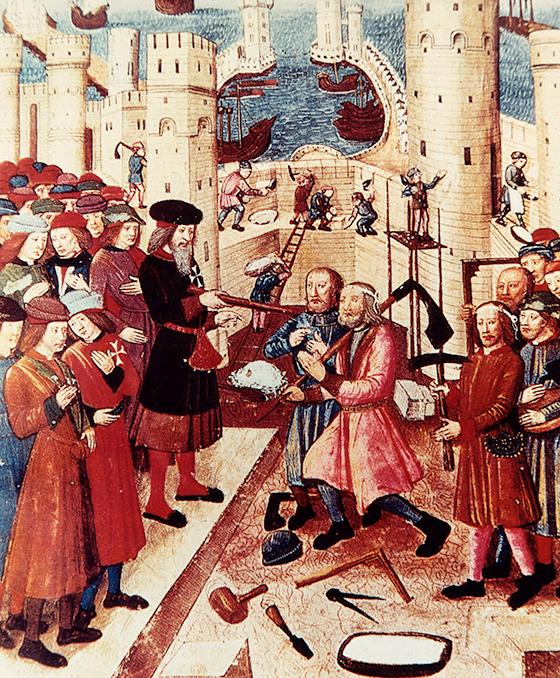