As defined by ethnologists, an “initiatory society” is one which integrates its members by stages, each stage marked by a particular type of test. It also distinguishes between a “lay” state and an “initiated” state. The passage from one to the other occurs during an initiation ceremony which, specifically among guilds, is referred to as “reception” or “passage”.

The contents and rites of these tests remain secret; only members of the association are allowed to be present at the ceremony, and the newly-received initiate pledges never to reveal the nature of the rites. He is then “recognised” by the other initiated members and learns the ritual words and gestures of “recognition” which allow him to identify himself to other members of the association.

All this may seem terribly mysterious. In fact, guild members approach the initiation ceremony with simplicity and respect. The reception of a new member has always had a triple goal. Firstly, it marks the recognition of the professional and moral qualities of the future member by other members, thereby sanctioning the efforts and virtues of the candidate. In the past, by singling out the best workers, it also offered them the opportunity for both moral and social elevation while excluding unworthy workers who simply wished to derive personal benefit from the association.

Secondly, the rites and symbols of initiation are the pillars of a moral education aimed at engraving in the memory of a new member the duties he owes to his fellows, to society in general and to himself, in order to encourage him to live and work with honour, dignity and other requisite values. Finally, by means of its psychological impact, initiation is designed to cement the cohesion of a group whose members all seek the same objectives.

Because he is supposed to pass from one state to another, from Aspirant to Companion, a young man receives a “companion” or “baptismal” name, symbolic of his new birth. The form this new name takes varies according to profession or trade. Generally, it is composed of the name of a province followed by the name of a virtue (e.g. Bordelais la Persévérance – “Bordeaux the Persevering”), but among the Menuisiers et Serruriers du Devoir (“Joiners and Locksmiths of the Duty”), it consists of a Christian name followed by the name of a province (e.g. Jean le Tourangeau - “John from Tours”). Among stonecutters and plasterers, however, the virtue precedes the place of birth (e.g. Fidelité de Saint-Martin-le-Beau).

There are two, if not three, states among guild members. The first is that of “Aspirant” (in all movements) or “Affiliate” (only among Devoir de Liberté associations). For the last half-century, entering into this state has involved presentation of a work and a ceremony (Adoption or Affiliation). The second is that of “Companion”, with a masterpiece and a ceremony (Reception). Finally, in a number of associations, there is also the state of “Accomplished Companion”, marked by a special ceremony.

The secrecy attached to reception and initiation rites notwithstanding, numerous old texts are known to deal with them. Some date from the 17th and 18th centuries, the result of investigations by the Church into what it regarded as superstitious practices. Others relate to revelations made by guild members in the 19th century, or have been found in library or archive manuscripts. It would appear from such texts that rituals varied considerably from one professional society to another and that they evolved over time. The oldest known rituals were Christ-centred, much in the style of medieval Mystery Plays, with candidates re-enacting certain episodes of the life and passion of Christ.

In the 19th century, there was a tendency to de-Christianise rituals, replacing them with elements associated with Freemasonry. They have continued to change over the past half-century, adapting to the cultural, religious and psychological evolution of the young.

All initiatory rituals are composed of episodes which aim to prove the sincerity, will, courage, morality and commitment of the candidate. The oath affirming loyalty to the “Duty” and to the candidate’s “Region” or “Coterie” is of particular importance. 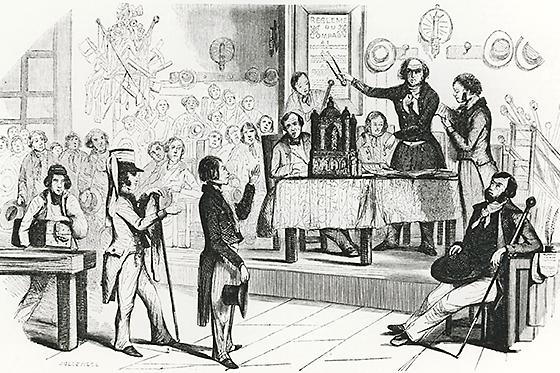 The reception ceremony, according the newspaper “L’Illustration” in 1845 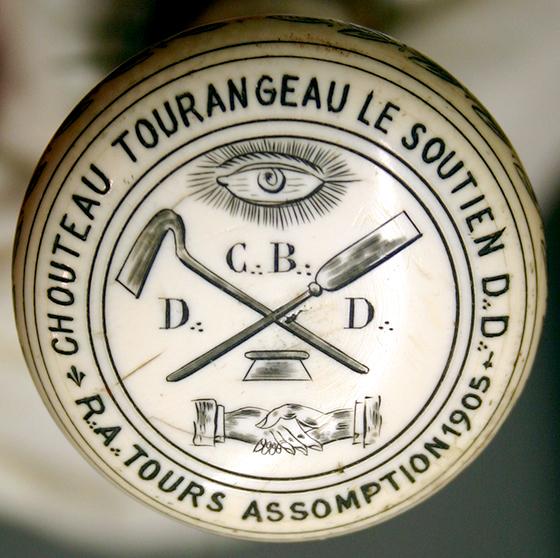 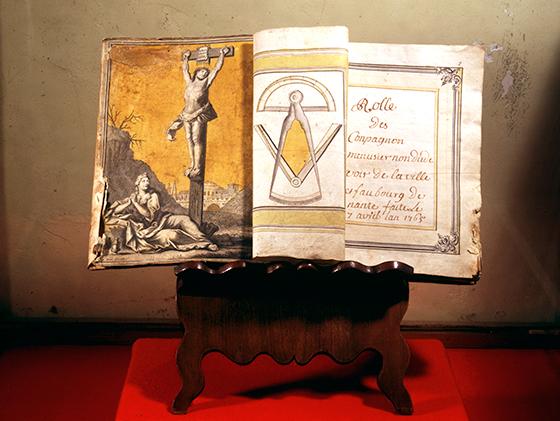 Roll of the Companion Carpenters non du Devoir of Nantes, 1765 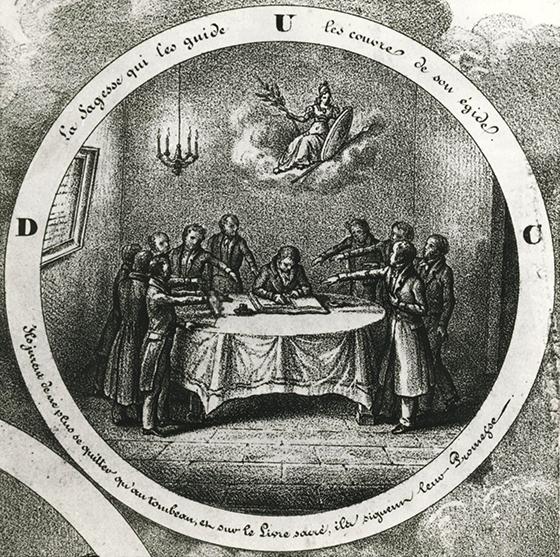 The oath, detail from a lithograph of the Companion Cloth-makers, circa 1850