A trade guild is not simply a professional training association, a mutual aid society or a union. It is not a religion, sect or secret society. It is similar in some ways to Freemasonry, but there are major differences between the two.

Guilds also define themselves by what they are not. They cannot be summed up simply as associations promoting professional training, or as mutual-aid societies or workers’ unions, even though they have encompassed all these functions at some point in their history. They are not religion brotherhoods, as their members do not worship a specific God or participate in religious ceremonies, even if their belief in work well done and a moral approach to life in society was, in earlier times, inspired by Christianity. Even less are they sects, as the goal of a guild is to see that young people integrate into the workplace and in society at large without gurus or financial finagling. Neither are they secret societies - guild associations have always been known to the general public and are today recognised as contributing to the public welfare. Guild members do not hide the fact, even though, especially if they are well established, they avoid advertising their membership so as to avoid exploiting their positions for commercial ends, knowing as they do that modesty is a requisite of professionalism. One may, however, qualify guilds as “societies with secrets,” bearing in mind that certain of their rites constitute the private experience of their members.

Owing to their goals, form and symbols, guild associations are sometimes confused with other movements, most especially with Freemasonry with which it shares the symbols of the compass and the intersected square. Apart from certain symbols and references to legends (notably the construction of the Temple of Solomon) and the fact that both are initiatory associations, however, the two movements have distinctly different geographical origins (England for Freemasonry, France for the Guild) and very different histories (Freemasonry emerged during the 16th century while the Guild can be traced back to the 15th). The principal difference lies in the fact that, for Freemasons, masonry is a purely symbolic trade whereas guilds are concerned with the practice of professional activities, and not necessarily those of stonemasonry and stonecutting. The numerous borrowings of Masonic rites and symbols on the part of the guilds during the 19th century never resulted in any alliance between the two institutions, which have always remained independent of one another.

Other movements also present similarities with the guild system. In the 17th century, the Bons Cousins Charbonniers (“Good Charcoal-burner Cousins” and the Bons Compagnons Fendeurs (“Good Woodcutter Companions”) were initiatory societies of foresters very similar to the guilds. In the course of the 18th and 19th centuries, they came to accept members from outside their trades, becoming fraternal assistance groups associated with Masonic or political tendencies (the Italian Carbonari and the French Charbonnerie) before expanding throughout the regions in which they were located (Burgundy and Franche-Comté).

Guilds also exist in Germanic and Scandinavian countries, primarily in the construction trades (carpenters, roofers, joiners, stonecutters and stonemasons). As in the French guilds, their members travel and hold initiation rites. They carry twisted canes and most wear ties of different colours (black, red or blue) denoting their societies, while others have done away with ties altogether.

Notable analogies with the guilds were observed in the 19th century among various associations – members of the Renards Joyeux, Libres et Indépendants (“Happy, Free and Independent Foxes” – a construction carpenters’ society), of the bakers’ society, known as rendurcis (literally, “rehardened”), of the earthenware makers and potters society in Tours, and of the Union des Travailleurs du Tour de France (“Workers’ Union of the Tour of France”) etc. They shared with the Guild the same goals of mutual aid and work well done, as well as certain rites and symbols, and also made the Tour de France. While rejecting the title of Compagnon, they followed a good number of du Devoir precepts.

By the second half of the 18th century, it seems that both the Compagnons and the Freemasons had observed similarities in the structure of their two associations. As initiatory societies, the guild and the Masonic movements both practised initiation rites, had means of mutual recognition (signs, secret handshakes and words) and exchanged questions and answers to identify a brother member, a Region or a Coterie. But although the structure may have been analogous, the content was quite different. Contrary to the idea held by both guild members and Freemasons today, the guild system is not a primitive, trade-based form of Freemasonry. Having originated across the English Channel, Freemasonry lent nothing to the constitution of the guilds. On the other hand, attracted by what seemed to them the very model of a prestigious and more highly evolved society with greater sense behind it, the guilds made free use of Masonic rites and symbols to reform and enrich their societies from the late 18th century onwards. The earliest known evidence of a borrowing of Masonic symbols (by a stonecutters’ guild, the Compagnons Passants Tailleurs de Pierre d’Avignon) dates back to 1782. However, for a number of reasons, it was during the 19th century that such borrowings accelerated. Firstly, there was the desire, following the Revolution, to modernise an institution which had come to seem archaic and incomprehensible to the youth of the “Century of Progress”. Secondly, in the 19th century, the guilds had numbers of “sedentary” members and employers whose affiliation with Masonic lodges facilitated contact between the two institutions. Thirdly, educational levels among guild members were improving; having learnt to read and write in greater numbers, they discovered a multitude of Masonic rituals and other printed texts, elements of which they began to use in their own ceremonies. The best known of these are the Legend of Hiram, the Flaming Star, the letter G, the triangular three points and a range of symbols denoting high rank.

Associated with or substituting for traditional guild elements, they became “guildified” as a new form of language by the Compagnons of the 19th century. Some, however, were to be later abandoned in the course of the 20th century. 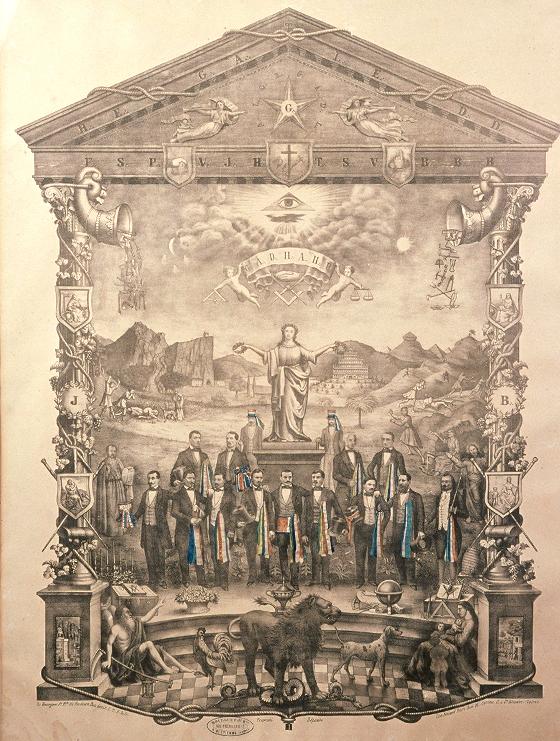 Lithograph, “The Union of Building Trades”, circa 1875, featuring a number of symbols of Masonic origin 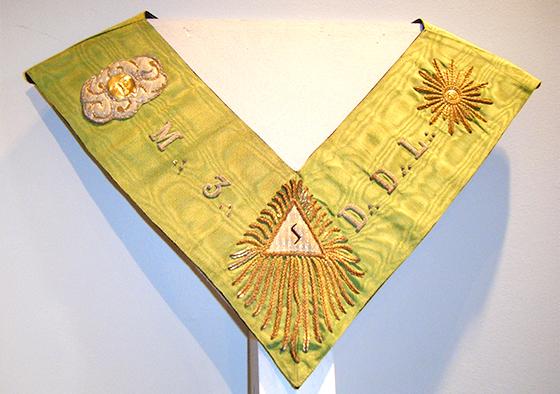 Chain of the 3rd order of Companion carpenters du Devoir de Liberté, circa 1850 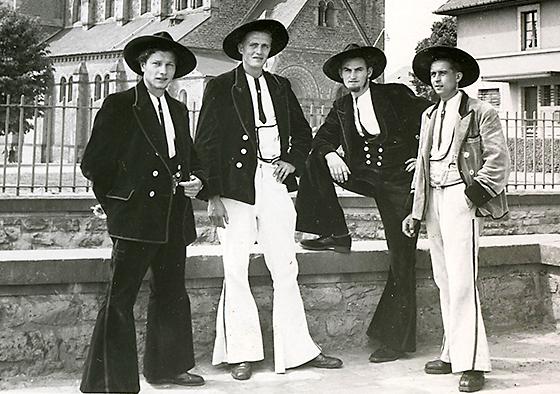 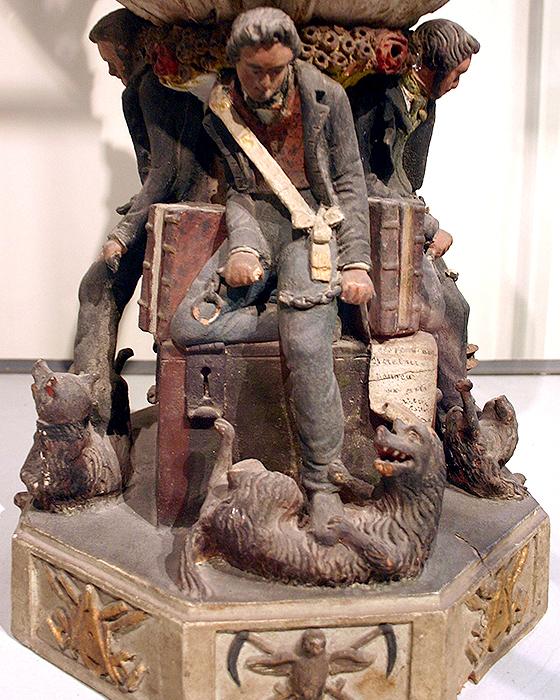 Great vase of the earthenware makers and potters society of Tours, circa 1848, detail 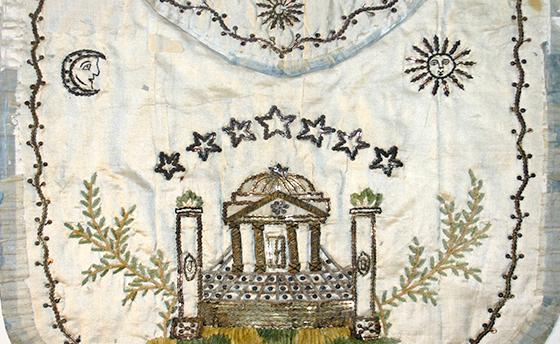 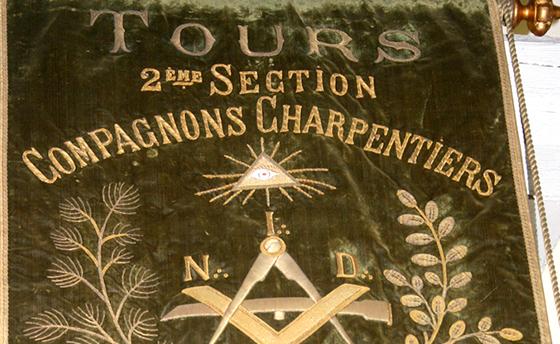