Existing archives are kept at the seats of currently active societies, either at local or national level. They are of three types: those which deal with the operation of the society, such as records dealing with arrivals and departures, enrolments, initiations, fines, etc.; those which concern correspondence among guild members in different cities on the Tour de France; and those which relate to guild regulations, rites and ceremonies.

None of these archives are available for research. Being private, they are rarely organised as they should be, and those in charge of the societies which conserve them lack both the time and the means to help genealogists with their research. Historians also have blocked access to these documents, as many of them, even the oldest, deal with the secret and ritual aspects of the guilds. Until the mid-19th century, official registers hardly ever provided information on the civil status of guild members, who were designated only by their nicknames. How is it possible to discover that, behind such nicknames as “Tourangeau the Perseverance” or “The Rigour of Bordeaux” a certain Jean Martin or Pierre Dupont were hiding? 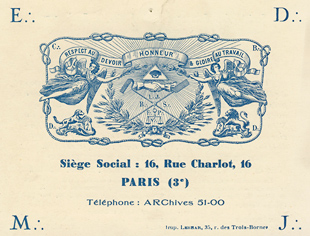