Travel is a primary feature of guild membership. Young workers are required to journey to the various cities where the above-mentioned centres are located; once settled in, he is to find employment at workshops and worksites with which agreements have been arranged. The young worker is a trainee during his tour of France. He discovers different techniques by moving from one enterprise to another for his six-months-to-a-year period of employment. Depending on the individual trainee, the Tour de France lasts from five to eight years, though it may last for longer or shorter periods.

In each city on the tour today, the guild centre consists of a restaurant, bedrooms, meeting-rooms and classrooms. Until the middle of the 20th century, however, inns were used as residences for journeymen. They made arrangements with the owners of an establishment, who were then guaranteed a sizeable clientele. In return, the female proprietor, who assumed the title “Mother”, was promised respectful treatment; guests were also committed to leaving no debts behind them.

The institution of the “Mother” continues today, but her functions are now more those of bursar and advisor than of innkeeper.

The Tour de France itinerary has undergone considerable change over the past half-century, and location of guild associations now involves regions which had earlier been ignored by travelling journeymen (Brittany, Normandy, the North and Picardy, Alsace, and the Massif Central) as well as foreign countries (Germany, England, the Netherlands, Switzerland, etc.). Nowadays it is even possible for the young to work outside Europe and on every continent.

Up until the World War II, the Tour de France roughly followed the courses of rivers and the Atlantic and Mediterranean coastlines. A network of cities stretched along the route. The journeyman was assured of finding room and board and a list of addresses for employment through a guild member elected for the purpose, the so-called “roller”. A distinction was made between receptive cities – the villes de boîte (“box cities”; where the “box” containing the Livre de Devoir, or “Book of Duty” was kept) and the so-called second-rate, “bastard” cities.

Since the mid 20th century, certain of these cities have ceased to be scenes of guild life. New evidence of such life, however, has appeared in such towns as Brest, Caen, Le Havre, Strasbourg, Nancy, Lille, Arras, Anglet, Tarbes and Colombiers.

For financial reasons, journeymen used to travel at least partly on foot; when means permitted, they would take horse-drawn vehicles or riverboats. Today, travel from city to city or abroad is usually done by train, car or even aeroplane.

Contrary to popular belief, the “Tour de France” does not necessarily follow either a clockwise or counter-clockwise pattern. Journeymen travel from south to north or from east to west, or the reverse, and are generally careful to avoid backtracking. Owing to the wide dispersion of guild centres and employment possibilities arranged with host companies, the Tour de France route ceased to be a linear itinerary in the 20th century.

As far as guild centres are concerned, inns or taverns were not necessarily kept by couples who were themselves attached to the guild in question. The husband did not have to be a former member. Journeymen were accustomed to saying that they were going to “the Mother’s”. They met en cayenne (in rest houses) according to their trade association. Each association had its own seat, but innkeepers could be chosen by two or three societies with reduced staffs. When this occurred, it was said that they “made Mother together”. Since the restructuring of the guilds in the 1950s, centres have offered shelter to all tradesmen in the same movement and their reception capacity has much increased. These establishments, or “houses”, are often set up in renovated or modern buildings and have little to do with the small hotel-restaurants of bygone days. 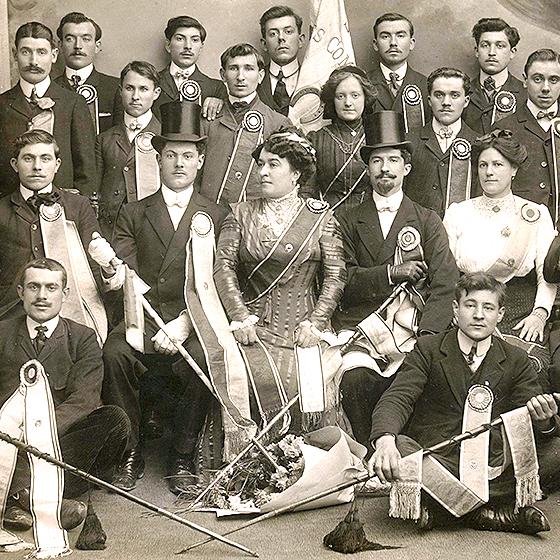 The Mother of the Companion Blacksmiths of Marseilles in 1910 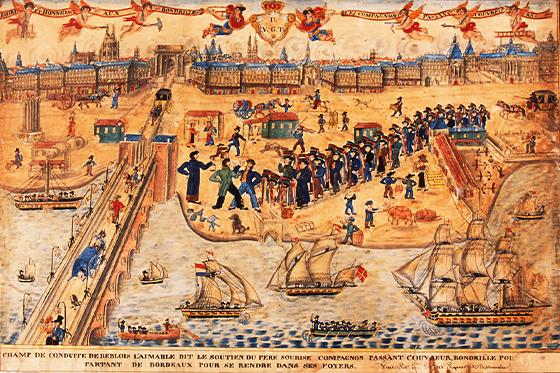 Leading out of Blois l’Aimable, Companion Roofer, leaving Bordeaux, circa 1825 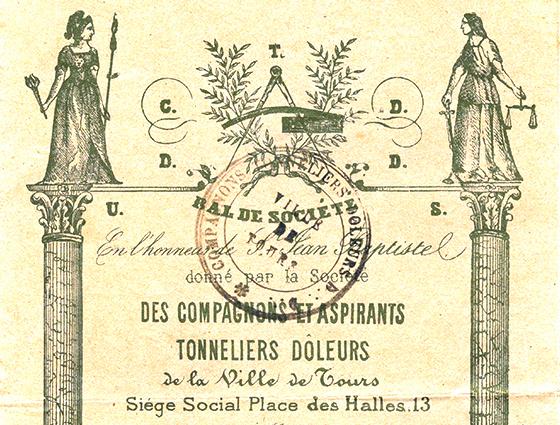 Invitation to the Companion Coopers of Tours’ ball (1908)