The aim of these societies was to ensure the moral and professional education of young men after their apprenticeships, in an atmosphere of brotherhood and mutual aid. Such young men were admitted into their respective associations once they had demonstrated professional ability, honesty and commitment. Such affiliation was a selective process. It entailed undergoing tests in a secret ceremony called the “Reception” or the “Passage”, later known as the “Initiation”. They had the right to carry a cane and, above all, to sport the insignia of their society, ribbons known as “colours”.

Finally, they were known within their group only by a “baptismal name”, a nickname generally composed of a reference to their province or city of birth followed by a virtue, a character trait or physical particularity, a term related to some episode in their lives, an architectural element, and so on. This explains such nicknames as “Bordelais the Constant”, “Langevin the Lame”, etc. The form of the nickname might vary from one society to another, and evolve within a trade from era to era. 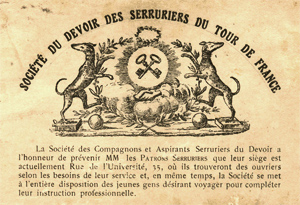 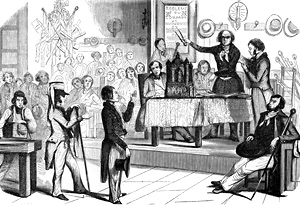