The first Companions’ associations of which we have certain proof made their appearance in the 16th century. From 1514 up until the 1580s, Companion Printers in Lyons and Geneva were organised into protective associations, travelled, went on strike, carried out reception ceremonies and used secret handshakes and other signs of recognition.
1514 to 1580: Journeymen printers in Lyons and Geneva organise themselves into protective associations, travel, go on strike, carry out induction ceremonies, and make use of secret handshakes and recognition signs – the earliest use of ritual known to us.

1540: A journeyman shoemaker from Tours is arrested in Dijon. He says he is visiting “a woman called the Mother”.

1583: In Troyes and Bourges there is talk of “conduits”, referring to processions formed by compagnons to ensure their fellows safe conduct from one town to another. 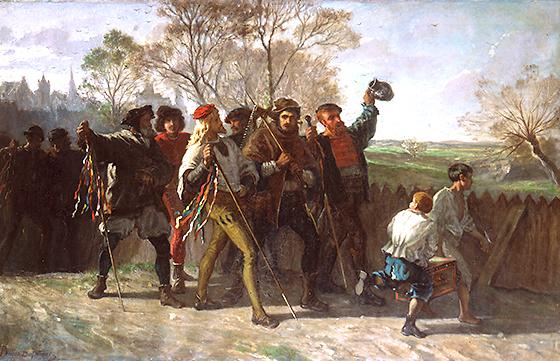